You’ve heard of Scrooge but how about the Golden Grinch who tried to steal Christmas?

“Therapy dog” and “thief” are not usually synonymous but in this case, the bandit was caught red pawed.  Last Wednesday, the Franklin Police Department’s number one therapy dog, a golden retriever named Ben Franklin, was caught committing larceny on camera.

The adorable dog tried to get away with his crimes but the camera does not lie!  As you can see here, Ben Franklin is clearly seen “stealing” toys reserved by the police department for the Santa Foundation, a charity based in Franklin.

Kudos go out to Officer Eric Cusson who bravely captured the golden Grinch carrying away a baby doll and carrier and hiding it.  Apparently, Ben Franklin was not too concerned about getting caught as he flounced his fluffy butt down the hall, tail wagging along behind.

According to reports, the toys were stockpiled awaiting delivery to the Santa Foundation when they were stolen.  It’s still under investigation but it is possible that Ben’s handler, Jamie Mucciarone, may have known what was happening since toys began appearing under his desk, said Sergeant Brian Johnson.

“I think Officer Jamie Mucciarone, who is Ben’s handler, realized what was going on after two toys appeared under his desk, which is where Ben likes to sleep,” said Johnson.

“You are priceless,” Cusson told Ben off-camera as he watched him duck under Mucciarone’s desk, curling up with the toy baby and a stuffed reindeer stolen from earlier. “He’s going to start piling toys over there, he keeps bringing them in.” 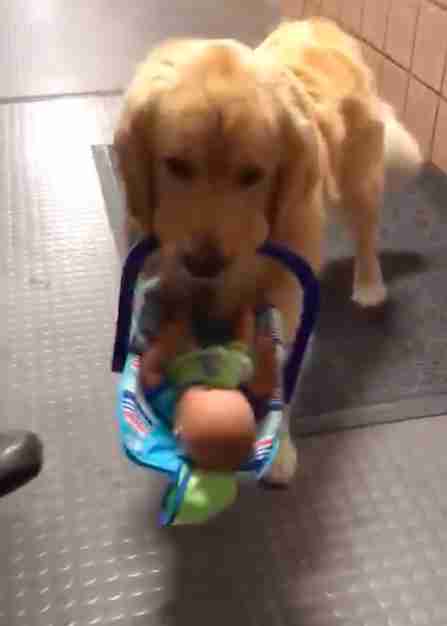 We’re not sure what punishment Ben will face but the police department learned their lesson.  They wrote on their Facebook page:

“We learned an extremely valuable lesson today,” stated the Police Department on its Facebook page later on Wednesday. “When you have a classroom full of toys ready to be shipped off to the Santa Foundation, you should...1. Close the door to the classroom, or 2. Keep the toys elevated. If not, a golden retriever will slowly hoard them throughout the day and bring them back to his lair.” 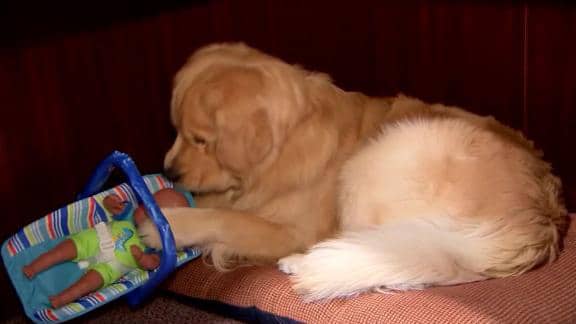 Please share this cute story with your family and friends.