One of the most special things about spending time in the wilderness is the possibility of seeing wildlife.  Even more amazing is the chance to encounter an adorable new baby.  Deer are always majestic to watch, especially tiny spotted fawns, such as the two in this sweet video captured by a logger.

The logger was driving along in a wooded area when he came upon two very young fawns resting on the side of the road. The tiny babies could have easily been hit by his huge logging truck but thankfully he saw them and stopped to say hello.

The babies are too young to have learned to be frightened by humans and their mother is nowhere to be seen.  The kind logger approaches the fawns and thankfully videos the encounter.

The fawns are very small and still covered in adorable white spots.  Their big shiny eyes look up at the logger as if to ask, “Who are you and what are you doing here?”  The man can be heard laughing in delight over getting to see the babies when something amazing happens.

One of the baby deer stands up and approaches him as if he was her mother!  You can hear the man say, “Oh my God, they’re coming right to me,” and then a moment later, “No, I’m not who you think I am.” 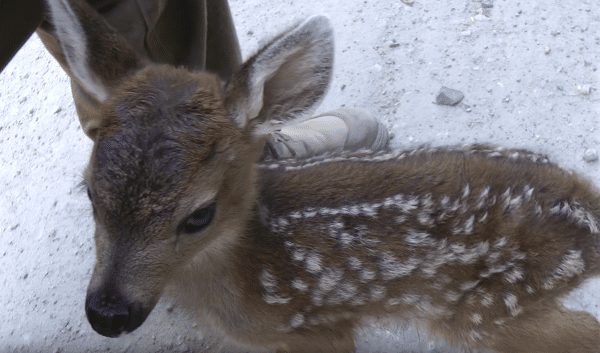 The sweet fawn nuzzled the logger and followed him around for a moment.  Knowing that they needed to be reunited with their real mother, he safely led them off the side of the road and into the bushes before he drove away.

We are delighted that he was able to video the precious scene and it’s clear he enjoyed the encounter.  We hope the babies quickly found their real mother.  As you will note in the video the logger never touches the baby just as wildlife expert’s advice when encountering any babies that are not in immediate danger.

Please share this adorable video with your family and friends.