The odds of being able to walk were not in his favor and his parents knew, life was going to be challenging for Roman.  But he doesn’t let that stop him.  With his faithful dog Maggie at this side, Roman overcomes the huge challenges that have faced him since birth.

Born with spina bifida, Roman’s parents knew he’d come face to face with many obstacles.  Spina bifida is a birth defect that happens when the spinal cord fails to develop properly, resulting in potential paralysis.

During the pregnancy, Roman’s parents discovered he had the condition.  They were faced with many hard choices.  They knew that their unborn child was expected never to walk so they decided to have him undergo a very risky surgery prior to his birth, they wanted to give him the best chance at life, but his future was unknown.

From the time he was a baby; Roman displayed his enormous personality and will to rise above his circumstances.  One Christmas, his parents bought a puppy named Maggie for their kids and Roman immediately fell in love with the dog.

From that time on, Roman and Maggie have been inseparable.  Roman loves to share his food with Maggie, especially eggs.  The two like nothing more than to cuddle on the couch.

She follows him everywhere.  He shares his bath, his bed, and loves to take Maggie to the dog park to play with her friends.  Roman even sings her songs, like Twinkle Twinkle Little Star. 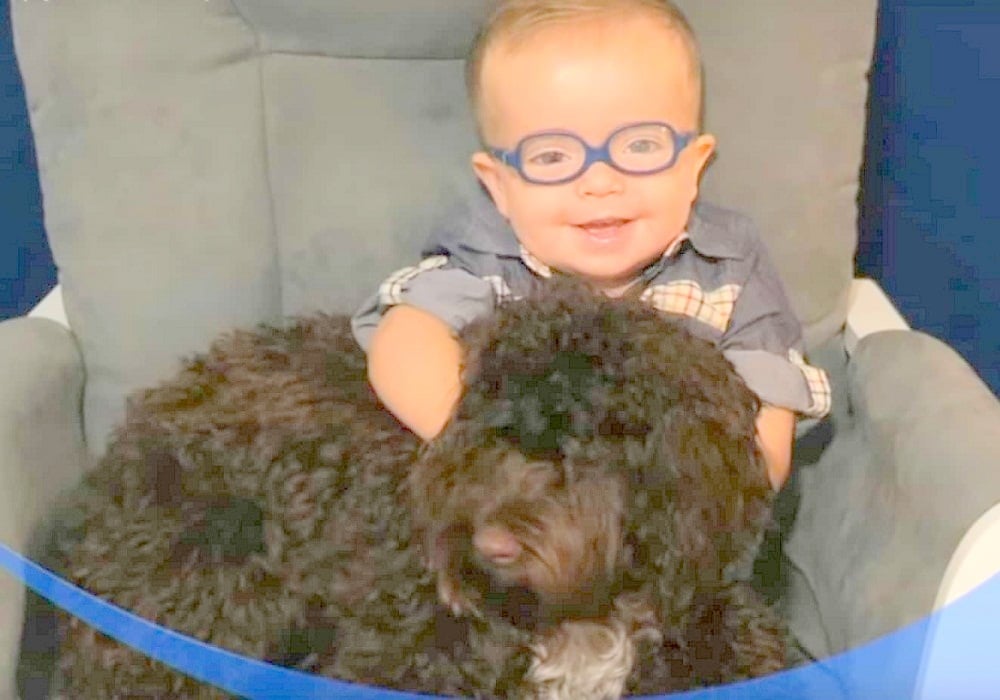 As wonderful as their special bond is, the real magic in their relationship happens because Maggie inspires Roman to beat the odds.  With her at his side, Roman learned to take a few steps with the help of his mom.  Then he learned to use a walker.

Then something momentous happened - he learned to walk with the help of crutches!  The Internet then blew up when his adorable voice could be heard saying, “Look Maggie, I’m walking Maggie.”

In this video Roman goes on to ride a bike, and he and his family embrace focusing on living a normal life without limitations.

Please be sure to share this inspiring story about Roman, Maggie, and his amazing parents with everyone you know.

« Pit Bull Dies After Protecting Two Children From A Coral Snake Bite
Man Tries To Convince Dog To Get Out Of The Pool, Determined Dog Is Having None Of It »