When a beagle puppy named Bo joined the household, Jasper the cat wasn’t so sure about the little guy.  Would they get used to each other?  Would they one day be friends?

Their owner Lisa Olsen-Plummer thought they would eventually get along but they would also need some time to get used to each other.  What she didn’t anticipate is how quickly the black kitty and little tan puppy would become best buds. 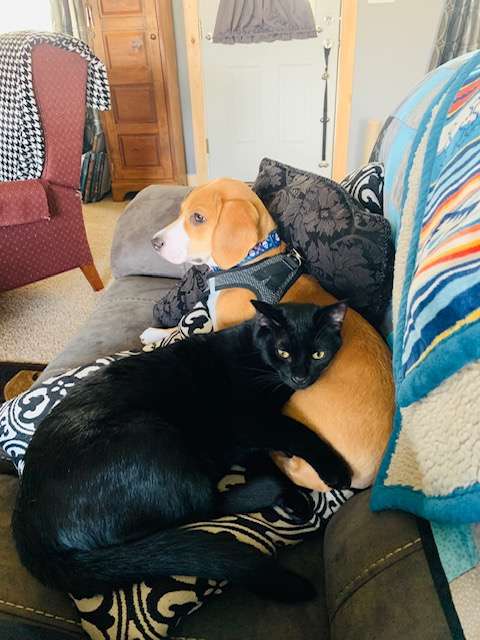 “Jasper was very cautious of Bo at first,” Olsen-Plummer told The Dodo. “He stayed back and watched from a distance until one day, he went up to Bo and put his arm around him.”

“It was almost like he was telling him, ‘It’s OK! Let’s play,’” Olsen-Plummer said. “I think that’s where Bo learned the hug from.”

From the day of the hug on, the two became best friends.  They spent all their time together and enjoyed playing with each other.  It was clear they were more than best friends, they were like brothers.

“They play hard and instigate one another,” Olsen-Plummer said. “Sometimes, it causes a fight and I make them split up — just like kids.”

Over time, their friendship has deepened.  They now share a special bond with each other and they also enjoy spending quiet moments together.  When the two are not rough housing, they also like to sit together on the couch and watch the birds through the window.

Recently, their mom was lucky enough to capture such a moment with her phone.  Jasper and Bo jump onto the back of the couch to look out the window and Bo tenderly wraps his paw around Jasper and holds him close. 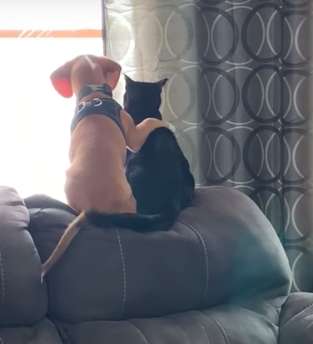 The two sitting together enjoying the hug is the sweetest thing.  The moment is so tender it is simply heartwarming to see.  Their mom told ViralHog:

“They were enjoying the sunny day watching the birds.  I was super excited to catch this beautiful bonding moment of two animals showing love for one another.”

The adorable video has since gone viral and teaches us all that despite our differences, love and friendship always wins.

Please share this sweet story with your family and friends.

Previous Article
Girl With Autism Is Invited To Lead Her Stuffed Puppy At Dog Show, Melts Hearts Everywhere
Next Article
18 Incredible Dog Transformations From Before And After Adoption