Crows are one of the most intelligent birds so it should be no surprise that this bird made his own version of fetch to play with his German shepherd friend.

Crows are known to be tricksters and problem solvers so when this crow stopped by his friend’s yard with a ping pong ball; he began to play fetch with his human friend to entice the dog to join the fun. 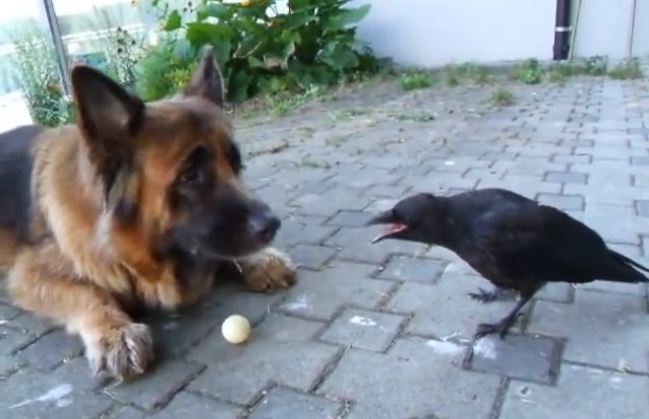 The crow spears the ball to ‘throw’ or rather roll, thus inventing a fun game very much like fetch.  The German shepherd was not about to let the crow have all the fun, so he watches his bird friend play and then joins in on the fun.

The two pals met when fur dad rescued the orphaned crow as a baby.  He raised the crow to be independent and a few months later, the crow spread his black, shiny wings and flew away.  However, one cute thing the bird did before he left home was play games of fetch with his surrogate family.

Although the crow is wild and free, he never went far and often returns to visit his friends.  When he does, he usually brings a gift that he proudly steals from someone in the neighborhood. 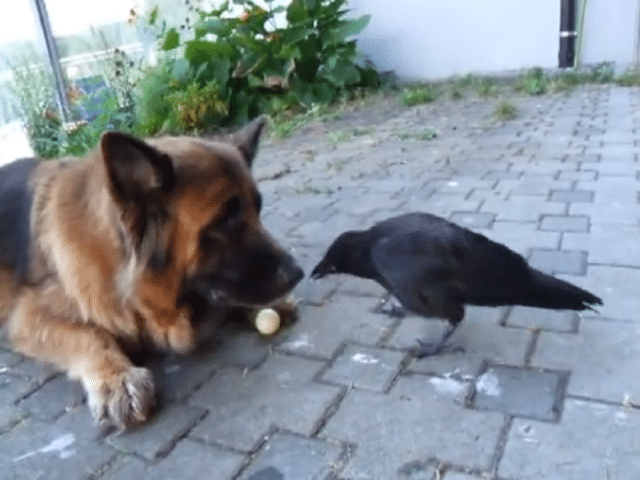 +To repay him for his gift, his human dad feeds him a little snack and then they begin to play their favorite game of fetch.  The man tosses the ball and the crow chases it and rolls it back.

The bird is not Greg Maddux so there is no telling where the ball will go but as he rolls it, he encourages his cute German shepherd friend to join the fun. He rolls the ball to the dog then squawks loudly waiting for the dog to roll it back.

The two unusual friends are super adorable and we’re not surprised that the two smart animals have remained friends. We are sure that they will continue to enjoy each other’s company for a long time to come.

Please share their story with your family and friends.