Aggressive German Shepherd Set To Be Euthanized, Changes His Ways After Becoming Best Friends With A Goose "They love each other to bits!" ❤️

German shepherds are amazing dogs that are filled with love and loyalty.  They are known to be brave and faithful companions who love nothing more than to be with their people.  It’s hard to imagine that there are people who will abuse them, but sadly there are.

Rex was one such dog that suffered abuse and was left chained in a scrap yard by his owner.  Eight years ago, he found his way to the Puriton Horse and Animal Rescue who saved him from euthanasia after he bit several people at an animal shelter.

Once at the rescue, Rex was not a happy dog.  He acted out aggressively and it took two people to feed him – one to distract him, and another to throw his food into his kennel.  Things were bleak for Rex.

But all that changed one day in the most amazing way. 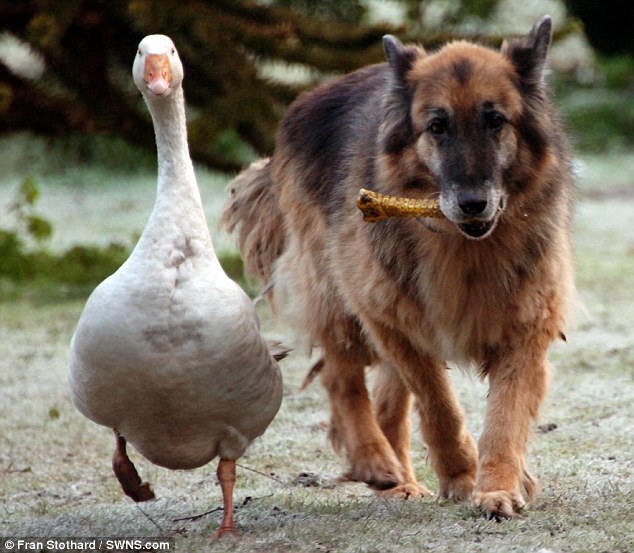 A goose named Geraldine came to live at the rescue.  For the goose and German shepherd, it was best friends at first sight. The staff thought Rex would act aggressively toward Geraldine but when they got close to each other, Rex was surprisingly affectionate with her. 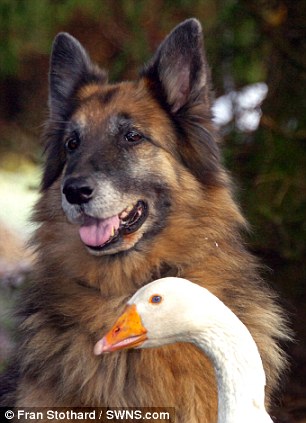 The goose and dog became such good friends that they even sleep together.  Now the staff allow them to run free together and were caught by surprise that an ill tempered goose and a grumpy dog would become best buds. 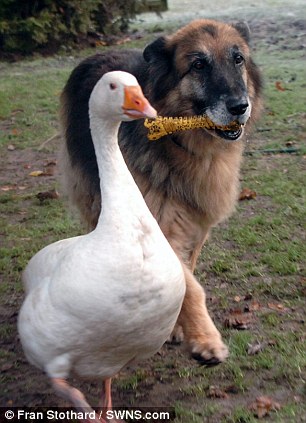 “It’s so comical to see them because they love each other to bits’, said Sheila Brislin, who runs the centre near Bridgwater, Somerset. 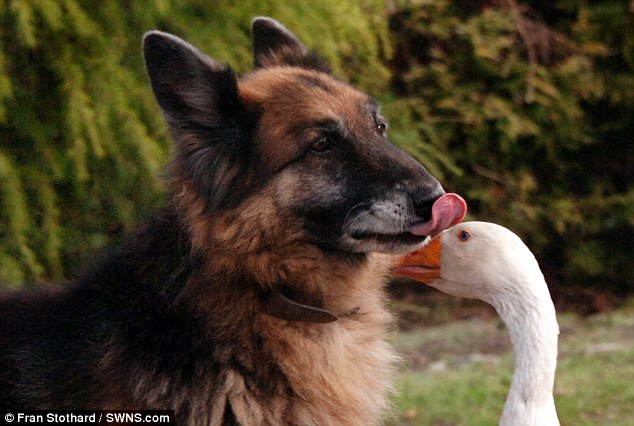 They pair now go for walks together and shower each other with affection.  Rex is a changed dog because of Geraldine. 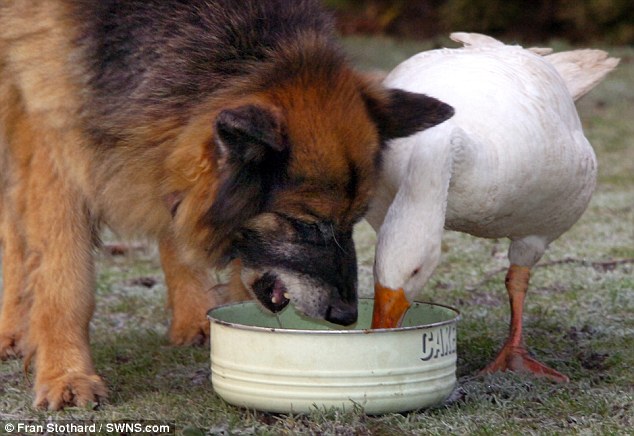 “[Geraldine] just runs around alongside him all day long and whenever we take him for a walk in the woods she has to come too.

‘They are very affectionate and he’s always licking her head. She snuggles into him and they sleep together every night.

‘Normally any bird that crossed his path would have been eaten by now, he’s that kind of dog, but not Geraldine.

‘I’ve been doing rescue work since 1997 and seen all kinds of strange animal behaviour, but I’ve never seen anything like this.”

Everyone at the shelter loves watching the relationship between Rex and Geraldine, except Vera, a German shepherd who is jealous of their relationship.

“Geraldine doesn’t like Vera at all and makes it quite clear that Rex is hers’, said Sheila.  “She goes on the attack if she comes anywhere near and Vera is scared of her.  We’ve had to give Vera lots of cuddles and attention so she doesn’t feel left out.”

We are so happy that Rex is now a happier dog and found a best friend.  Please share their amazing story with your family and friends.