Silly Dog Gets Jealous And Demands More Attention They're just like kids!

Holly the Husky/Shepherd cross becomes green with envy every time her owner begins to pet Titan, a Siberian Husky. Holly, you need to learn to share the love!

Let’s be honest, we all love our doggies even when they start acting like divas! This spoiled Husky over here is one such example. As her owner tries really hard to make both his doggies happy by cuddling and petting them, one of these adorable pooches really misses all the fun when she becomes jealous of her best friend!

But seriously, human, you have two hands! You can pet them both at the same time, just reach out and do it! Holly knows that best and she constantly demands to be pet equally and at the same time, because why not? So, every time her owners turn to Titan, she immediately pulls his hand towards her; she doesn’t accept even a second of cuddle-less time! 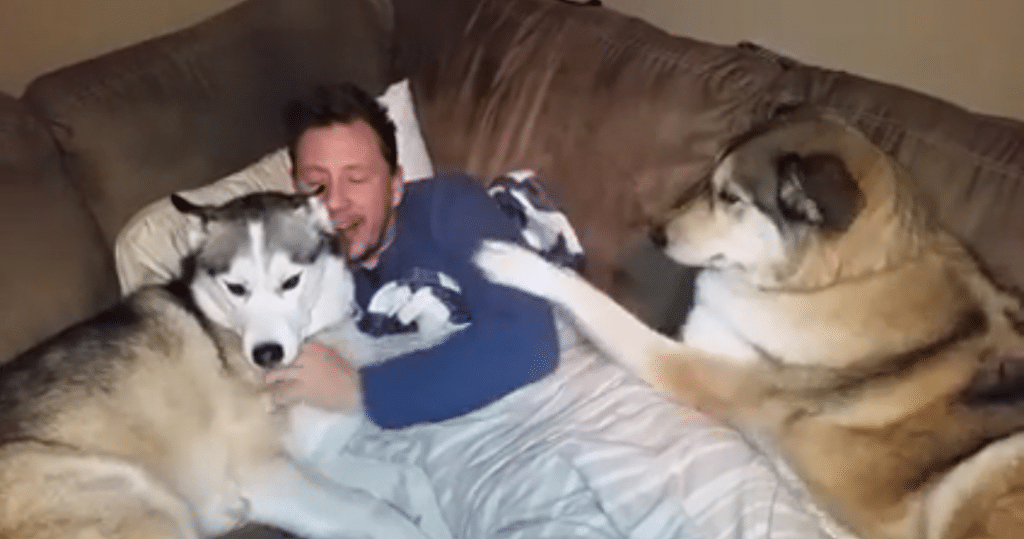 She shows her owner several times how she feels about him cuddling a dog that isn’t her, but it seems the human can’t take a hint. So, she does what any of us would do in such a situation – she gets up and goes closer to her owner, blocking his hand’s way to the other dog. “He’s mine!”

He gets so jealous that he isn’t getting the attention that he decides to throw a hilarious tantrum. Oh, Holly. Don’t be silly. Dad loves you both!

Previous Article
German Shepherd Sings Along With His Owner In The Bathroom
Next Article
Owner Got A Cat In 1988, Did Not Expect To Throw Him A Birthday Party 30 Years Later, Making Him The Oldest Cat In The World

Owner Got A Cat In 1988, Did Not Expect To Throw Him A Birthday Party 30 Years Later, Making Him The Oldest Cat In The World
C. Olmstead November 24, 2019
PRIVACY POLICY | CONTACT US | Dog Dispatch ©All rights reserved.