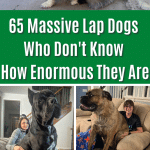 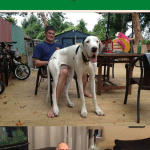 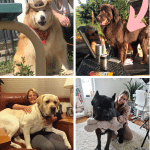 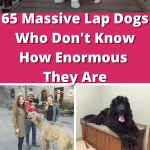 Large puppers are extra adorable and endearing because of how unaware they seem to be of their own size and strength and insist on being held like they're small puppies. I guess having a large pet dog is a little like having a very tame pet bear.

Either way, whether they're unbelievably teeny-tiny or back-breakingly humongous, they are still our little babies. So scroll on down to see some very large doggos who don't know just how big they are.

1. Obviously it's the chair that's too small.

2. This dog looks like someone should put a saddle on him and ride him.

3. The kind of dog to ride into battle.

4. The vet is a scary place no matter your size.

5. That child basically disappears behind this pooch.

6. The car seat is a little too small for this mega pupper.

9. Watching TV in a real normal way on dad's lap.

10. This dog is so big he's bigger than a full-grown human being.

11. This doggo would look fantastic in a suit of armour.

14. There may not be enough space on the lap but that doesn't mean he can't lay there.

15. Is it just me or does this look like a small lion?

16. This baby has their own guardian dog.

20. He doesn't look like he's enjoying the hug much.

21. When the lap is a little too small, you have to rest the feet on the ground. Still works.

23. How can anyone resist those puppy dog eyes?

25. A boy and his guardian angels.

28. This dog is really earning the "Great" part of their breed name "Great Pyrenees"

31. This dog is massive AND jacked.

32. Hanging out with grandma.

33. Best view to wake up to every morning.

34. I think this boy might be hugging a polar bear.

35. This pooch doesn't look very happy to share his dad with his hooman sister.

37. Is the counter small or is this dog just very large?

39. Protecting the hooman from the sun.

40. Just a bear taking a stroll in the woods.

41. The dog version of Hercules.

43. No matter big or small, every dog loves their stuffies.

44. This dog looks like he should be guarding the gates of Hell.

46. You know your dog is huge when he's the same size as a donkey.

47. Ooh it looks like this lady has a pet polar bear.

48. No one is going to mess with this kid when she's got her bear guardians by her side.

49. Lap dog so big he basically covers every part of his hooman.

50. The puparazzi has caught this chonk loafing around.

51. Big or small, all doggos are lap doggos.

52. This large pupper is pretty much taking up the entire hallway.

53. Hmm, looks like someone dressed up a bear as a dog.

58. Officially taller than a person.

60. What a strange-looking horse.

61. Road trips might be a bit more challenging with giant dogs in the car.

62. Can you believe that this is a puppy?

64. Look at those ginormous toe beans on this big sleepy pupper!

Big dogs are a special kind of amazing in how quirky and adorable they are. No matter how big they get, these mega doggos will always be our big little babies.