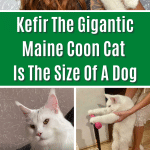 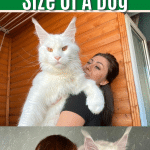 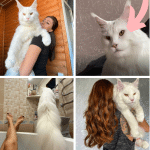 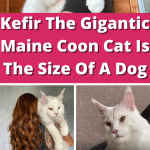 The Internet exists for cats and Kefir is taking the entire Internet by storm with photos of his glorious fluffy self.

Kefir is a Maine coon, a cat breed that grows quite large. They can be as large as some dogs and small children! Kefir's owner, Yuliya from Russia, says that Kefir is now 1 year and 9 months old. He clocks in at about 26.5 pounds, a hefty weight for a cat. Apparently, Maine Coons typically keep growing until they are about 3 years old so Kefir won't stop at this size!

Meet Kefir. He is a Maine Coon, one of the largest cat breeds in the world.

His owner, Yuliya, says that Kefir is 1 year and 9 months old. Maine Coons continue to grow until they're 3 years old.

Yuliya says people have funny reactions when seeing Kefir. People usually assume he's a dog and then are very surprised to see Kefir is actually a giant cat.

Despite his size, Kefir is actually a really gentle cat. Yuliya says it's like he's a kitten in the body of a giant cat.

Being such a big and fluffy cat, Kefir sheds a lot and leaves a lot of fur all around his house.

Maine Coons are one of the largest domestic cat breeds.

They generally grow up to weigh up to 8 kilograms or 17 pounds.

They can reach a length of almost a metre. This is Omar, the world's longest cat at 120cm!

Maine Coons can grow to a height of 41 centimetres.

Via My Modern Met

Kefir is a very intelligent and loving cat who is a little on the quiet side. But he is playful and completely adorable.

Kefir is a sweet and gentle giant who is beloved by his family. We're so happy that his family chose to share him with the world because Kefir is a truly magnificent cat.