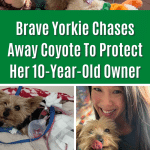 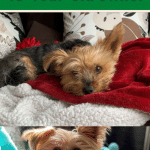 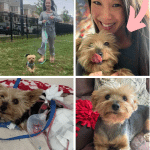 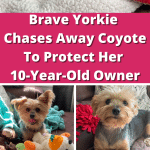 Dogs are very devoted to their humans and this little Yorkshire Terrier is no different! Although tiny, this Yorkie bravely fought off and chased away a coyote to protect her little human friend.

Macy is a Yorkie mix and is 6 years old. She was rescued by Dorothy Kwan 5 years ago when Macy was a puppy. Although she is a friendly dog and is gentle with everyone she meets, she has a very special bond with Lily, Dorothy's 10-year-old daughter.

The family lives in a residential neighborhood named Scarborough in Toronto, Canada, and never expected this would happen in a million years. But Macy's bravery was caught on a surveillance camera.

Via CityNews680 and GoFundMe

This is Macy, a 6-year-old Yorkshire Terrier mix who was rescued by her owners 5 years ago.

This is Macy with her owner, Dorothy Kwan. Dorothy rescued Macy when she was a puppy.

Macy has always had a very special connection with Dorothy's daughter, Lily, who is now 10 years old.

The incident occurred when Lily was walking Macy in their neighbourhood. A coyote started chasing Lily and Macy.

Lily was terrified and dropped Macy's leash when she started running away, screaming for help.

Although Macy is very tiny, she bravely fought off the coyote, attracting his attention away from Lily.

In the top left hand corner of this photo, you can see little Macy trying to chase away the coyote.

Finally, the coyote runs off at a slow pace.

Macy chases after the coyote to make sure he is going away.

Macy keeps chasing the coyote until it's safe for everyone again.

Having courageously fought off a coyote and saving Lily's life, Macy was left with many serious injuries that required surgery and a lot of care. The coyote attack caused significant injuries to Macy's body and her leg, all of which required expensive treatment. “She received extensive injuries to her body and leg. She is undergoing surgery for her wounds at the emergency animal hospital”, said Dorothy.

Dorothy had been heartbroken after the attack happened. “My heart is breaking for both my little one [Lily] and our dog whom we rescued 5 years ago,” said Dorothy. “I’m a single mom of two and my children and our dog mean everything to me.”

Dorothy reached out for help and made a GoFundMe account.

People from all over the world were so moved by the little dog's bravery and chipped in to help pay for all of her surgeries and medication. They've almost reached their goal and Macy is recovering quite well!

The spunky little warrior has managed to overcome her serious injuries.

The coyote who attacked Macy was microchipped and is named "Urban 23". Here he is playing with his family.

"Urban 23" has since been relocated to stop further attacks. However, Dorothy said that his family has not been relocated and that she is worried this sort of attack may happen again, especially because some people are feeding these coyotes.

Dorothy advises everyone to never feed wild animals because that encourages them to enter residential neighbourhoods just like Urban 23 did.

Lily had become very afraid of stepping out of the house but is slowly beginning to be less scared.

She has started walking Macy in their neighbourhood again but it took her some time and a lot of hard work to overcome her fears of getting attacked again.

People all over the world love Macy for her devotion to her best friend and how hard she fought to save Lily from a coyote.

Isn't it amazing how this brave little girl put aside her fears and fought off a coyote to protect and save her helpless human sister? What a courageous pup!