For water loving pups, a swimming pool is a big source of fun. During the hot summer months, there is nothing more refreshing than cooling off by paddling around a backyard pool.

Elliot the German shepherd / husky mix loves playing in the water.  When his owners realized how much he enjoyed swimming in the pool, they decided to get one of their own.

For Elliot, the pool could not go up fast enough.  As soon as it was ready, he would swim in it as much as possible.  He quickly learned to add aquatics to his daily exercise routine.

It didn’t take long for Elliot to learn that he didn’t need the family to go swimming with him, either.  Before his owners knew it, the clever dog was climbing the ladder, in and out of the pool, and swimming all on his own.

One day mom hid and captured this video of Elliot deftly climbing the ladder of the pool when he thought no one was looking.  Up the ladder he carefully goes, placing one paw after the other until he reaches the top. 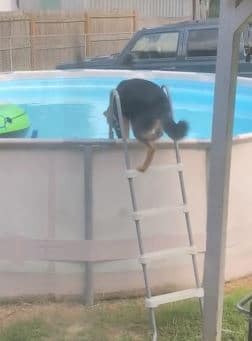 Once on top of the ladder, he launches himself into the pool and begins dog paddling around seemingly without a care in the world.  Circling the perimeter of the pool, Elliot is clearly enjoying himself. 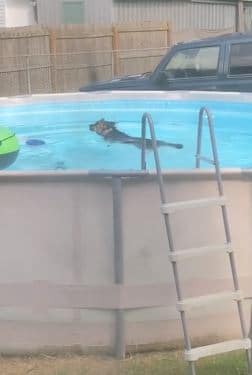 Watching Elliot paddle around, head bobbing up and down, is adorable.  When he’s done, he swims over to the ladder and climbs out, no problem at all.  He’s obviously a pro at this and has done it many times before. 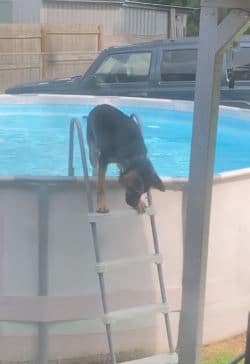 We hope Elliot has a great summer and shares his pool with the rest of the family.  Please share his adorable video with your friends.

« New Study Shows That Every Year In A Dog’s Life Equals 30 Human Years, Not 7
Golden Retriever Acts Like A Big Goof When Introduced To The Family’s New Kitten »