When a French Bulldog, named Frenchie, stumbled upon a police horse while on a walk on Wall Street in NY, he decided to approach the giant animal and befriend it.

Police were active in the area because of the Occupy Wall Street protests to keep the peace.

A crowd slowly gathered when they began to notice Frenchie and the horse interacting with each other. Prepare yourself for a cuteness overload! 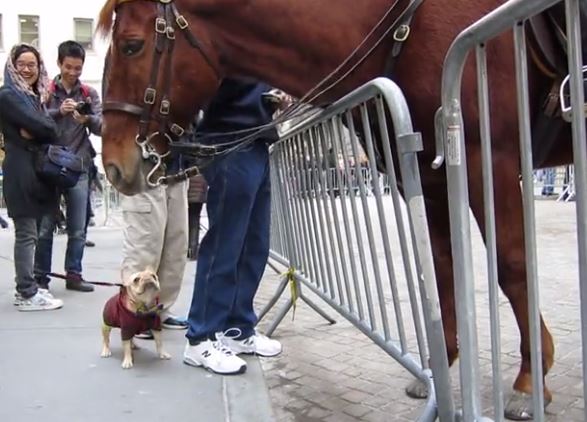 “I saw this on my walk back to the office from lunch. It was a nice contrast to the perception everyone has of the NYPD in the area due to the Occupy Wall Street camp nearby,” the video description reads.

The French Bulldog pup excitedly wanted to play, jumping and hopping around. She was obviously happy to make a new friend.

The police horse was a lot calmer, but still equally intrigued by its tiny new friend.

The two friends spend a little time together, and even get caught in an exceptionally cute photo going nose to nose. You can hear people laughing in the background and one woman can even be heard saying “That’s so cute” as she walks by. 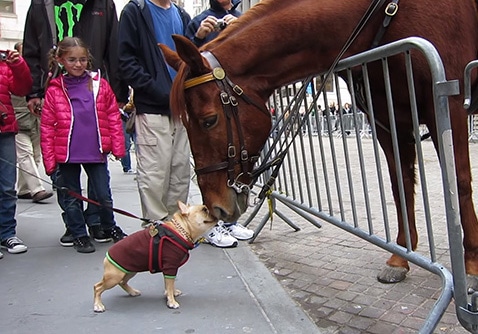 Before long, most of the people had a phone in hand to capture the moment on tape.

As if the scene wasn’t cute enough, Frenchie even tried to play with a little girl who was admiring the pair. This is one soul warming video that you must see for yourself!

« Happy Puppy Is Having Time Of Her Life In The Pool
Bus Station Welcomes Homeless Dogs, Makes Beds To Protect Them From Winter »