Heroes come in all shapes and sizes and are often responsible for saving lives in the most unimaginable of situations.  You never know who might one day be called a hero.  Some of the most amazing heroes have four paws and a tail.

There are many stories about heroes, including dogs that have saved lives.  Dogs have performed great acts of courage, sacrificing their life for another; intuitively gotten help for someone who was sick; and led people from danger.  The stories and situations are numerous and all heartwarming.

What all these stories have in common is that dogs truly are man’s best friend and sometimes the hero has a little more challenges to get through than others.  Such is the case in this story about a 17-year-old blue heeler mix named Max that is not only a senior years past his prime, but blind and deaf as well.

His hero story began on a day like any other except on this day, his little best friend, a 3-year-old toddler from rural Queensland, Australia, wondered into the infamous Brushland and got lost.  Risking exposure from inadequate clothing, and her young age, the family was frantic to find her.

They quickly formed a search party and nearly everyone, including the local police, joined forces to locate the tiny girl.  Over 100 people were looking for her and after fifteen hours still could not find her.  Darkness, wind, and cold rain were making matters even worse. 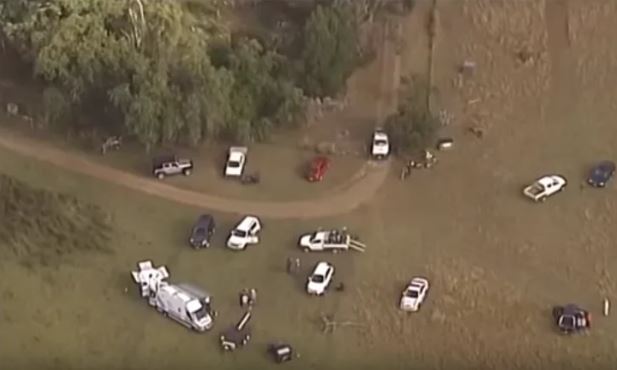 Suddenly, one of the searchers, her grandmother Leisa Bennett, was wondering through the darkness when she thought she heard Aurora’s voice call out.  She ran toward the sound when out of the darkness, Max came toward her. She said:

“I shot up the mountain, and when I got to the top, the dog came to me and led me straight to her,” recalls the grandmother to a local news station.

Max then led the rest of the search party to the little girl who was cold and scared but otherwise okay.  Max may have been old, deaf, and blind but he stayed right by his tiny human’s side and helped keep her safe and warm.

“With the weather last night it’s quite lucky she is well because it was … cold and raining. She’s a very hardy young lass to survive that without any ill effects and everyone, all the volunteers, are extremely happy,” said SES are controller, Ian Phipps, to ABC News.

The community was so grateful to Max for protecting Aurora that they decided to make him an Honorary Queensland Police Dog.  The local police department posted photos of Max to their Twitter page with an announcement that said:

“SUCH A GOOD BOY, MAX! He stayed with his 3-year-old human who was lost near Warwick last night while we frantically searched for her. For keeping her safe, you’re now an honorary police dog.”

We’re honored to share your hero story, Max. You truly are a good dog. Job well done.  Please share with your family and friends.