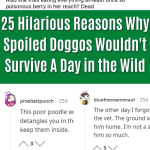 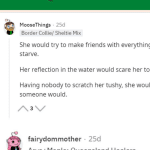 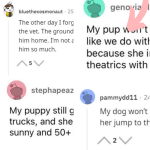 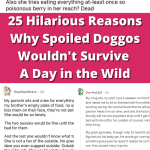 We all love our pet dogs to death and give them every luxury we can manage. We spoil them with everything they want under the sun, whether it's the best food or the cutest outfits, or all the pets and belly rubs. But that means that they are probably not quite (or not at all) equipped to make it in the big bad world on their own. Which makes it hard to believe that dogs are even related to wolves!

In one hilarious Reddit thread, dog owners discuss all the reasons why their spoiled puppers would never survive out in the wild on their own. While no one in this thread is actually planning to abandon their dogs, it's so funny to read about all the quirks people's dogs have developed that make them adorable and endearing but also so unprepared for the wild outdoors.

So scroll on to find out just how spoiled some doggos are and the truly ridiculous ways they would fail at being out on their own.

1. The original poster wanted to know about everyone's spoiled dogs. Her own dog is too much of a baby.

2. I don't think anyone is going to put his boots on for him and carry him in the wild.

3. This dog is too precious to be out on her own.

4. Always looking for a buddy to play with.

5. He's not quite smart enough to make it in the great outdoors. Besides, there's no one to pet him there!

6. Can you imagine this dog looking for kibble in the forest?

7. Looks like the first doggo is so pampered he would need his whole royal court to follow him into the wild. The second one shows more promise.

8. This poodle needs regular maintenance. There better be groomers in the wild.

9. Being afraid of fake animals is not a promising sign but the mental image of a dog being afraid of a plastic donkey is hilarious!

10. Well, we all know dogs love their balls. This is very normal.

11. Awww this pup hates being cold and eating alone. We can all relate to that, right?

12. Looks like this one got a few less brain cells than the others.

13. I understand their reasons. Wet and dirty things are gross and loud noises suck.

14. She needs a personal chef AND a performance with her food? This one is definitely royalty!

15. I mean, TV does help sleeping. But this dog is still very spoiled.

16. This is probably one of the most ridiculous reasons on this thread! What a funny dog!

17.  Hmm, getting scared when a leaf falls doesn't sound like this beagle is going to make it in the wild. 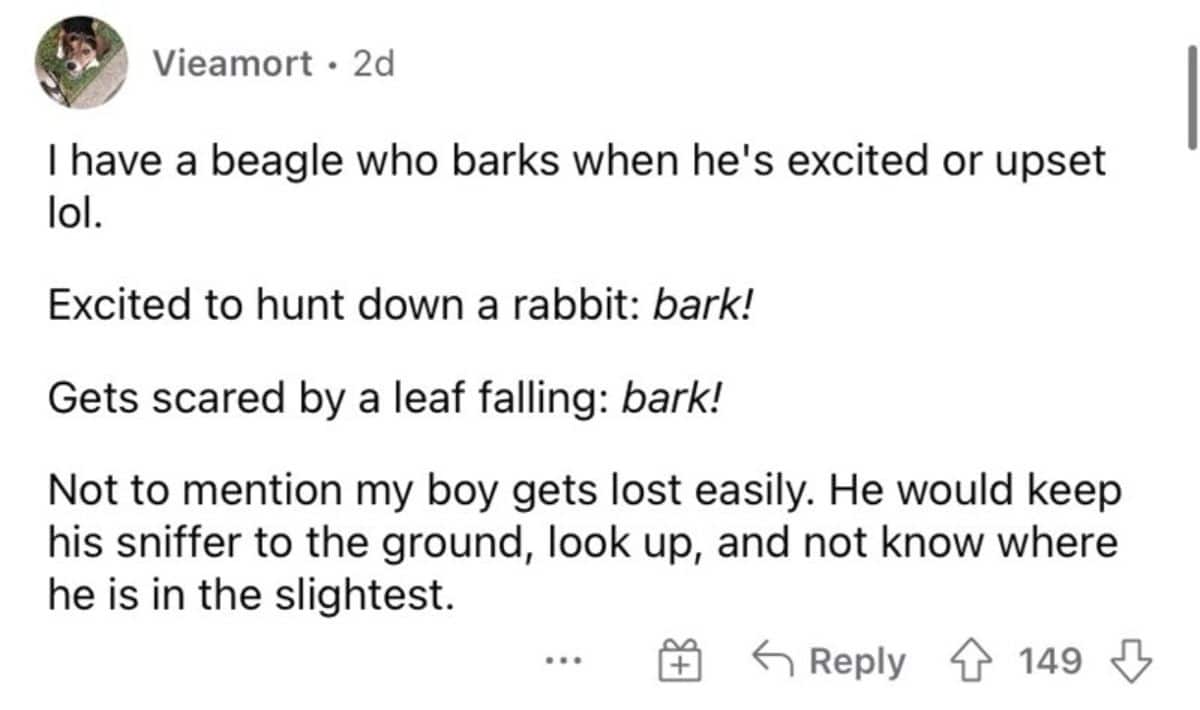 18. Awww this pupper's story is so sad. But it's so cute that she would never kill another animal. 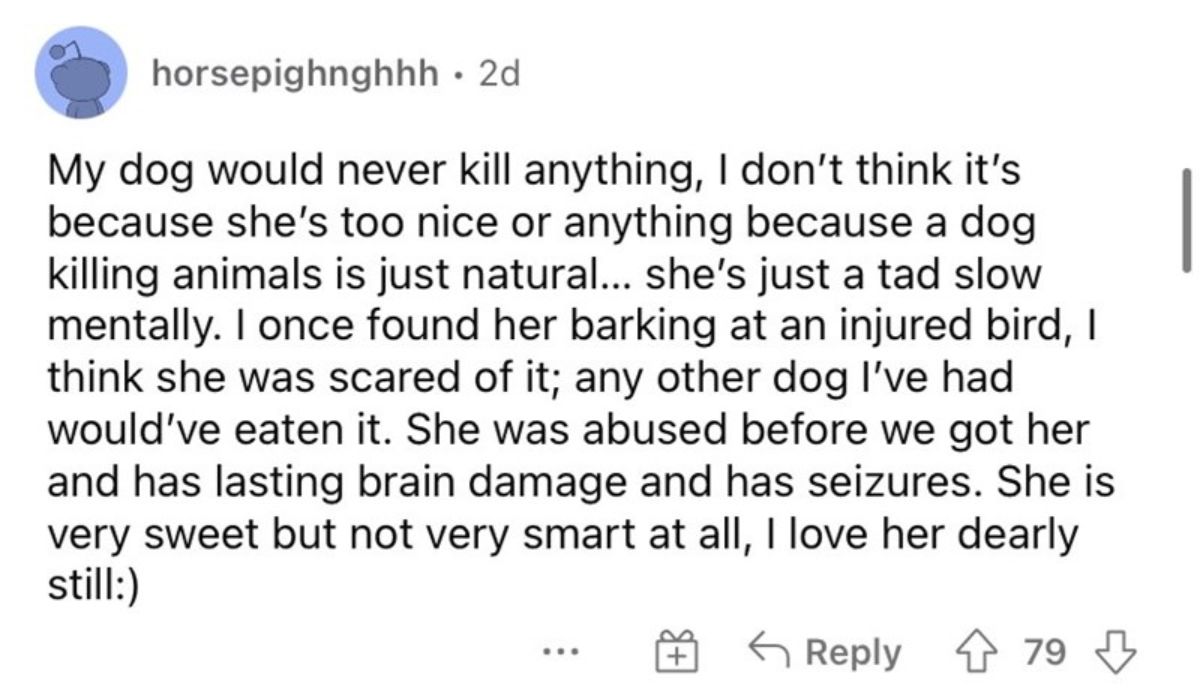 19. Well, loud noises are indeed scary. She's a puppy so we'll allow it.

20. Fussy eaters definitely can't make it in the forest. This doggo would need a court of people providing for her.

21. I'm glad she didn't get injured but her welcoming treats from burglars but not her vets is truly hilarious! 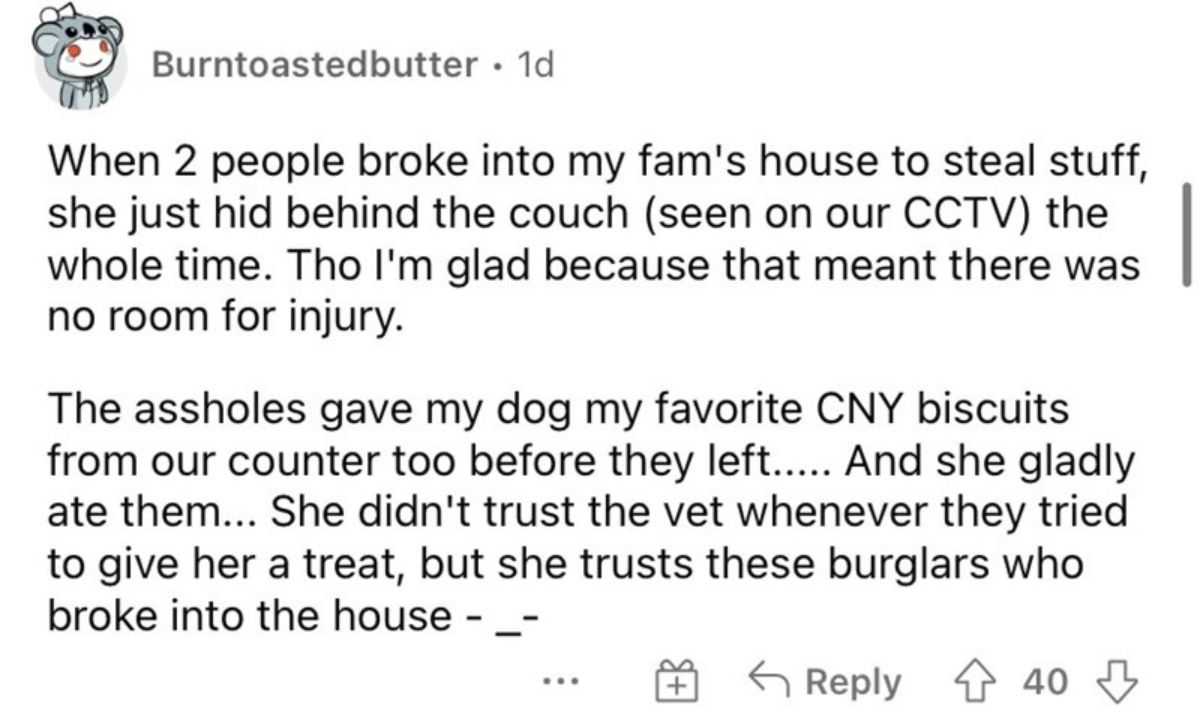 22. Small dogs never seem to know exactly how small they are. This pup is feisty but maybe too feisty for her size.

23. Yep, this whole family of dogs are definitely not ready for an owner-less existence! 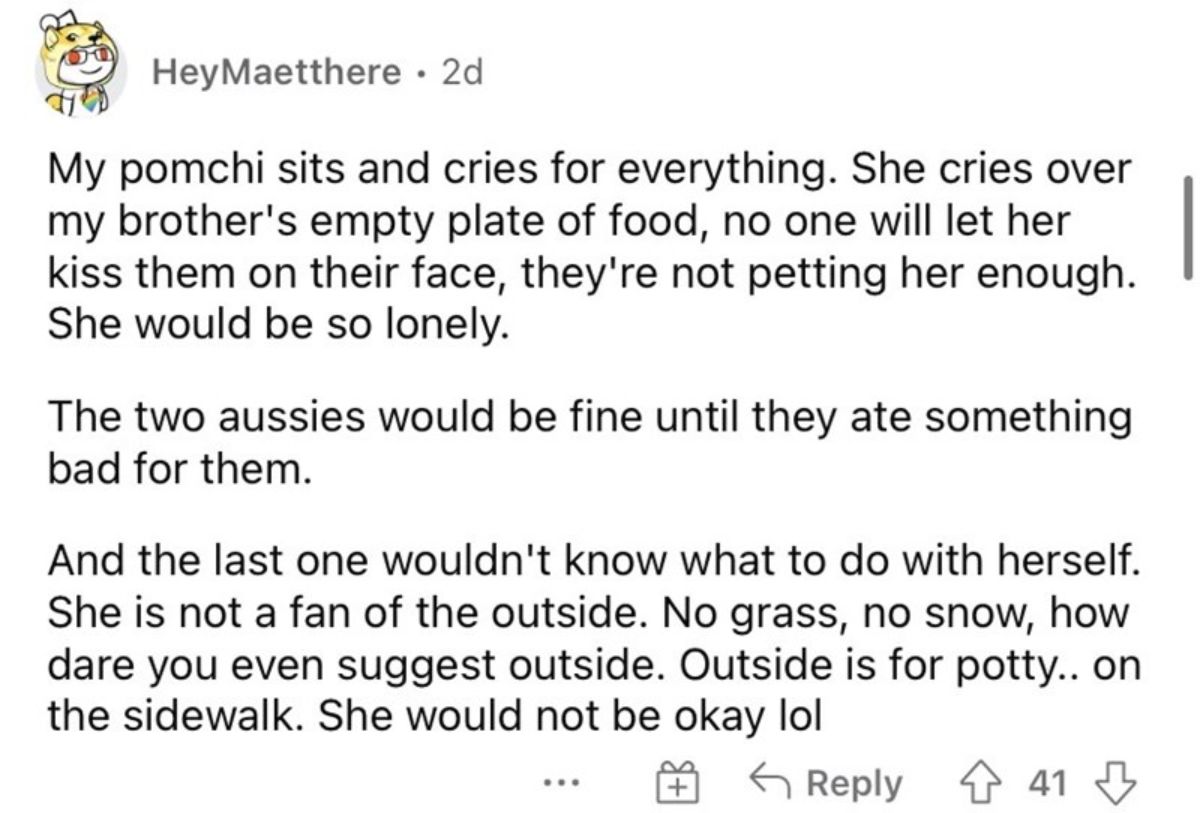 25. Another pair of dogs who are complete opposites. Still wouldn't make it in the wild.

I love all these quirky dogs and how their owners have spoiled their best friends so much with love and luxury! Seeing these dog owners describe their dogs was hilarious. Is your dog like this too? Would your beloved pet survive in the wild or be adorably lost?