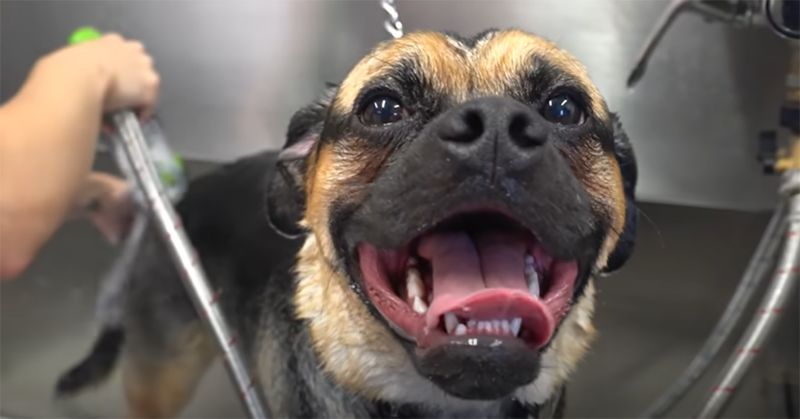 Since dogs aren’t picky about what breed they procreate with, there are some unusual mixes out there. It’s always fun to try to guess what breeds are in there and some people even go as far as to buy DNA tests to figure it out.

It’s up to the owners to spay or neuter their pets to prevent unwanted pairings. However, some people chose not to spay or neuter due to health reasons and some just never get around to it. In these cases, every once in a while, there is accidental breeding.

You never know what mixed breed you might see and often these happy accidents are simply adorable. Mixed breeds also often make the best pets. Take this dog named Goblin, for instance, the little guy could not be any cuter!

Goblin was shared with the world by Vanessa De Prophetis, who runs Perfect Pooches from her home, in Niagara Falls, Canada. Vanessa regularly shares clips of her furry clients to her TikTok page, @girlwithedogs. 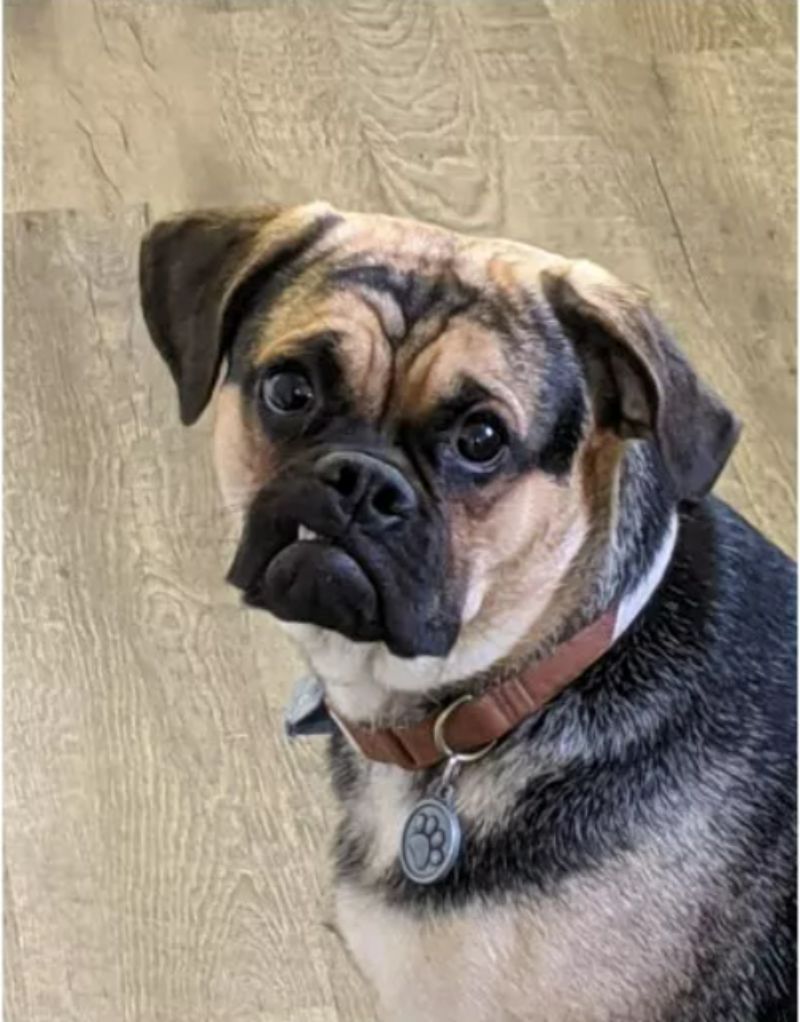 A while back, Vanessa shared her grooming client, Goblin, on her TikTok page because he was so unusually adorable. She claimed people had “never seen” a dog like him before. She was most likely correct, except for maybe the other pups in the litter.

Turns out, Goblin is a German shepherd dog mixed with a pug. And, the result doesn’t get any sweeter. The small dog is large on adorableness and simply the cutest thing ever. Speaking to Newsweek, De Prophetis said:

"I have never seen this particular mix before. His face and personality is all pug, I didn't notice any German Shepherd traits other than his coloring and size.”

"Goblin is a super sweet dog, with lots of energy. He loves dogs, people, and pretty much everything else. He is very food-motivated as well and will drool at the sight of food. He makes little honking noises when he runs (the pug part of him), especially when chasing new friends at the dog park.”

"I like to call him overly affectionate, as he really loves to meet new people and dogs. He loves to chase the skunks in his backyard too. He also loves snuggles, and will usually sleep in and go to bed at night when he is tired all on his own." 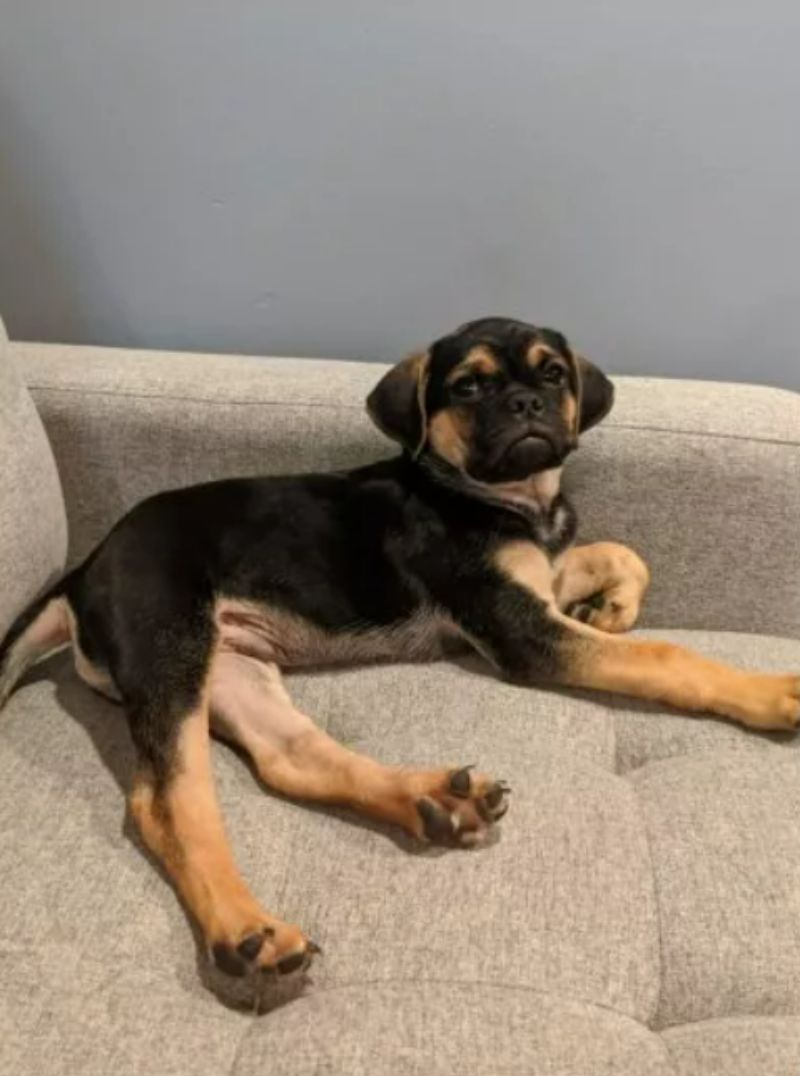 Goblin’s owners, Chelsea and Patrick Lapienis, told Vanessa that Goblin’s breeding was an “accident” and that (Goblin) “is a lovable goofball who is super sweet and very excitable. He loves playing fetch, hide and seek, and even has some puzzles that he likes to solve. He loves meeting people and dogs alike, and is friends with his vet."

According to the Lapiensis’, "We were told that the mother was a pug, and the father was actually a 6-month-old German Shepard who wasn't fixed yet. They don't usually breed this mix, so he was definitely a surprise.”

Are there more Goblins out there?

"In terms of the number of siblings, we just know that he was the last one and that he was the runt of the litter. He was 7 lbs when we got him at 2 months, so he was a decent size.”

"It was 100 percent love at first sight! When we met him, it was an instant attachment, and we are so happy that we added him to our family. He is also a huge cuddler who loves to snuggle when possible. He has very high energy levels and very low energy levels at times." 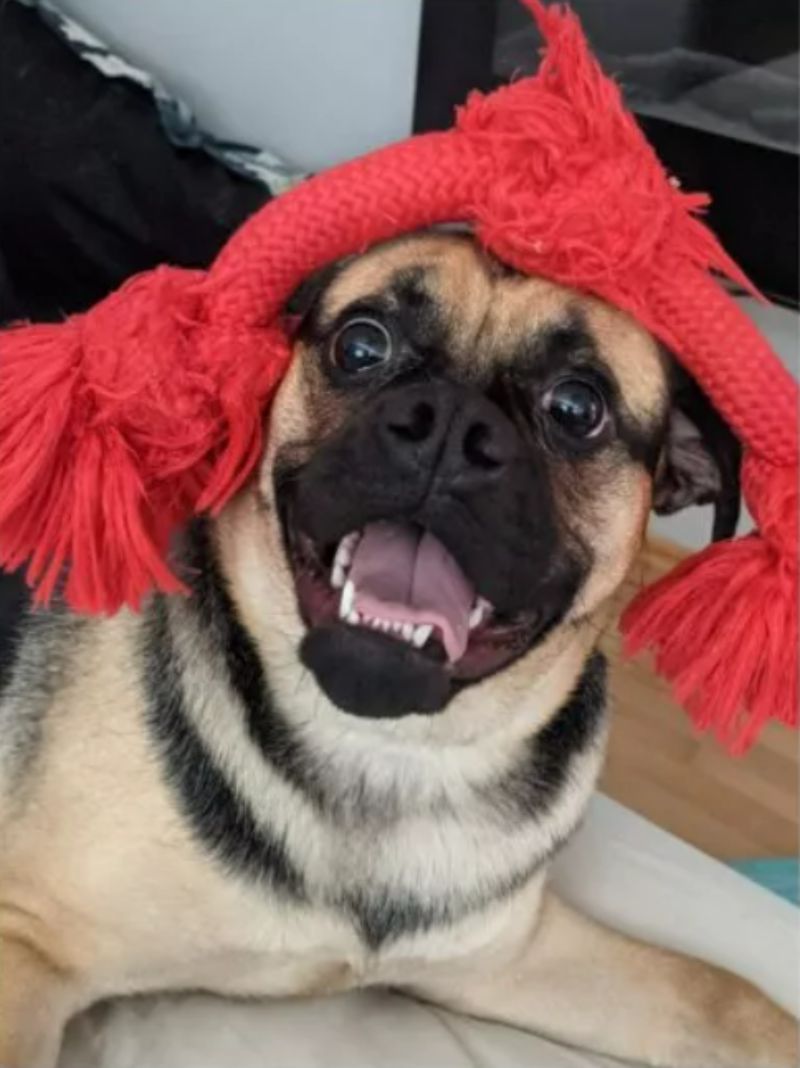 In the clip, De Prophetis said: "I assure you that you have never seen a dog like this before. At first glance his body resembles a German Shepherd, but where does that curly tail come from? Place your bets on his unique mix, but you will never guess it. This is Goblin, and he's a pug and German shepherd mix.”

"Now you can use your imagination on how in fact this happened, but I personally would like to have a conversation with the individual who is responsible for this. While I assume this was an oopsie, somewhere out there there's a very determined pug daddy who must be held accountable for making every owner from this litter laugh for the next 15 years."

One thing is for sure, Vanessa is crazy about Goblin and happy to have him as a client. She raved about him, saying: "I must admit he is exceptionally cute, in his own little gremlin way, and his personality is outstanding."

We think he’s pretty special too, don’t you agree? Please feel free to share his adorableness with your friends.