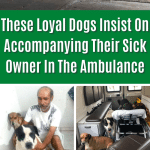 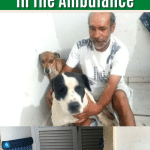 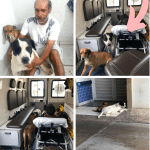 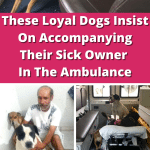 Dogs are known for being extremely loyal and dedicated to their owners. And Bob and Chiara are two perfect examples of this unceasing loyalty.

On November 1st, their owner, 47-year-old José Antônio Pereira, started having convulsions and had to be rushed to the hospital in an ambulance. But his two dogs, Bob and Chiara, refused to leave. Instead, these two loyal pooches jumped into the ambulance after their owner and refused to get out, not wanting to abandon José.

José is a collector of recyclables in Bauru, Sao Paulo of Brazil. He was found having convulsions on the ground. Josy Plana, the ambulance driver, and Maria de Lourdes Pereira, the nursing technician, from Mobile Emergency Care Service (SAMU) arrived to help José.

But his dogs would not let anyone near him for fear of him being harmed. So the first thing they had to do was help the dogs calm down so they could provide José with life-saving first aid.

The two dogs never left his side and stood guard to make sure he was alright. Finally, he was loaded onto the ambulance to be taken to the hospital and the dogs jumped in too. Knowing that the dogs would be upset and would get hurt trying to run after the ambulance on the road, Josy and Maria allowed Bob and Chiara to accompany their owner to the hospital.

When the two dogs were barred from entering the hospital, they stayed by the door to the emergency room of the hospital. They stayed there the whole night, waiting for their beloved owner to come out safe and sound.

Thankfully, José was discharged the next morning and was reunited with his loving dogs again.

Bob and Chiara wouldn't dream of leaving José behind when he was helpess.

These devoted doggos refused to leave their owner and followed him into the ambulance.

Although unconventional, they allowed the dogs to go with them to the hospital to prevent them from being injured.

Bob and Chiara were worried for their sick owner and stayed with him the whole time.

Bob and Chiara weren't allowed in the hospital so they stayed by the doors of the emergency room the whole night.

José was reunited with his beloved dogs the very next morning when he was discharged from the hospital.

Bob and Chiara prove that dogs are in fact man's best friend. This wholesome story shows that dogs will go to any lengths to help and protect their owners. Humans truly don't deserve dogs.