Despite the loyalty of dogs, sadly humans don’t always repay that devotion in kind. Every year, thousands of pets find themselves abandoned at shelters, sad, alone, and confused.

Such was the case of this sweet brown and white shelter dog. The adorable pup was dumped at the shelter through no fault of her own. Living in the midst of other abandoned pets, she longed to find a new home.

One day her life changed when a reporter went to the shelter to write a story about the dogs living there. When he came upon the sweet dog, she jumped up on his leg, hugging him, refusing to let go. 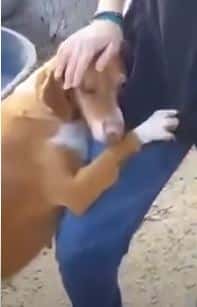 He tried to comfort the sweet dog but soon realized she needed much more than a few pats on her head. She needed someone to save her from the plight that all shelter dogs face.

Moved with compassion, right then and there he began to bond with the dog. As people recorded their encounter, he made up his mind to adopt her despite having no plans to adopt any of the dogs while on his assignment. 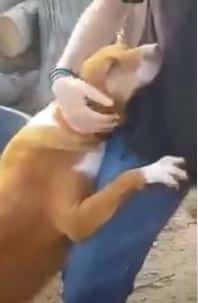 Please share this special story to inspire people all over to considering adopting a shelter animal and, if you’ve already adopted a shelter dog, be sure to share your story with us.