When the Fox Project rescued a badly injured and ill fox that was found on the side of the road, no one could have predicted that it would lead to a beautiful friendship between the fox and a retired engineer named Mike Trowler.

The red fox named Cropper apparently had been injured by a dog and also had contracted toxoplasmosis, a serious infection.  He was sick and weak and had collapsed on the side of the road in Turnbridge Wells, England.  The Fox Project determined that the copper colored fox would never be able to return to the wild so they began to look for someone who could care for the animal. 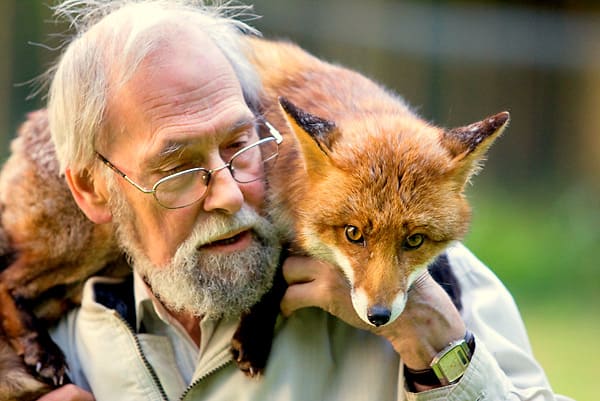 He took Cropper into his home and nursed him back to health.  The fluffy fox soon began feeling better and the two became inseparable.    The pair went on walks, snuggled, took naps, and shared lots of hugs and kisses.  Cropper even liked to ride around on Mike’s shoulders.

Cropper made himself at home with Mike and his other animals.  They would often play with the cats and steal food from the dog’s dish.  He became an important part of the family and fluffy companion until he sadly passed away seven years later.

Shortly after, Mike took in anther fox that needed a caring home.  Not everyone is equipped to care for wildlife and it should be left to people with training and the ability to handle the task so we are very grateful for caring people like Mike who take on the huge responsibility.

Please share this story about Mike and his compassion toward wildlife with your family and friends.