A lost dog was roaming the streets for four months. He would follow every woman he saw, hoping to find his owner. People from the neighborhood were able to feed the dog, but every time rescuers would try to help him, he would run away.

After a long four months, some crew members were able to trap the dog and search for his owners. They were able to find the dog’s ID number on his ear, and located the registered owner, who was in shock that the dog had been found. 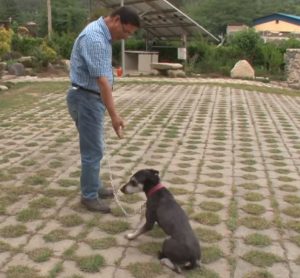 When the owners were shown a video of the dog, the woman started to cry, because it was their lost dog Chunjang. When they were reunited, Chunjang was hesitant at first, but after a little while, he recognized the woman and started jumping for joy! He had finally found the woman he was looking for over the past four months. What an incredible, happy ending!

« German Shepherd Mom Is Captivated By Her Puppies
Her “Jam” Comes On The Radio. Dog’s Dance Moves Have The Internet Rolling »