It's not uncommon to see people running to take cover during a rainstorm. Your first thought is often “Ah! Where’s the umbrella?!” Most don’t look around to see who they can help. But this couple was different.

Their act of kindness bolsters the idea that there really are good people in the world. This is what a crowd at the Gala Bingo Hall in Dover, UK saw one day during a downpour. They looked outside and saw a scene that made their hearts soar.

Two total strangers stopped dead in their tracks in their pursuit of taking cover. Why had they stopped? To care for dog who was helpless against the storm. They took off their own rain gear to cover the dog!! Then they stood in the pouring rain getting drenched so they could shelter the poor dog.

“These two kind hearted individuals are selflessly helping a stranger’s dog stay dry in the sudden downpour of torrential rain earlier today. It really is quite heartwarming to see acts of kindness like this.”

After a while, people from the bingo hall brought the couple umbrellas. The couple endured for nearly half an hour while they waited for the dog’s owner. When he finally arrived on the pitiful scene, he claimed he had not realized how hard it was raining. 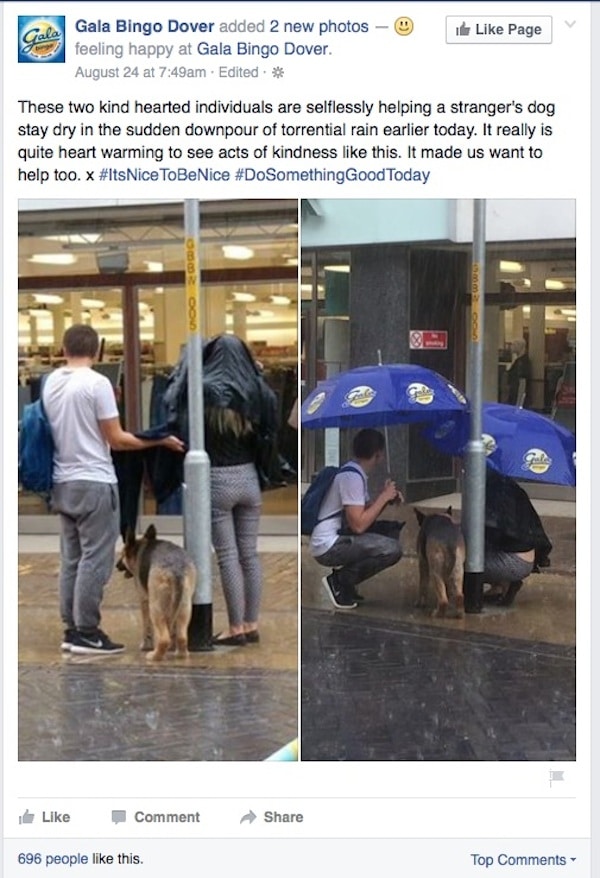 What a beautiful act of kindness these two have shown toward this dog. It really does give hope that humanity isn’t perishing quite as horrifically as we maybe thought.