The Pocatello Zoo in Idaho is home to many interesting animals, including an elk named Shooter, who is now considered a hero after saving one lucky marmot. 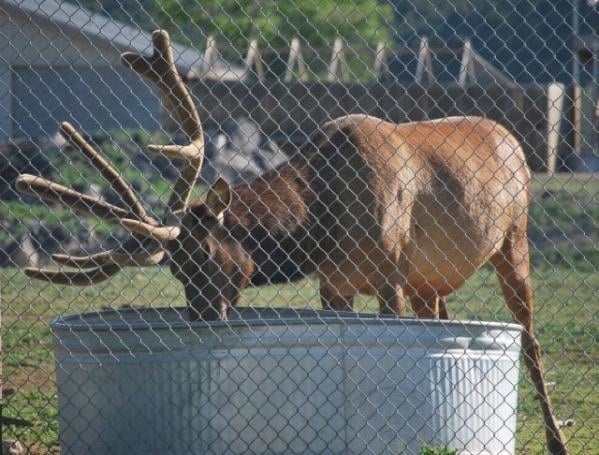 One day officials at the zoo noticed that Shooter was spending an unusual amount of time near his water trough and moved in for a closer look.  Dr. Joy Fox was one of the zoo staff who observed the elk.  She wondered why he was spending so much time rather than grabbing a drink and moving along, as he normally did.

Dr. Fox watched the elk then decided to get her camera.  She quickly returned to see what the elk was fussing with since something inside the water trough had grasped the elk’s undivided attention.

For fifteen minutes, the zookeepers watched as Shooter circled his trough, dipped his head, and at one point, positioned his antlers so they could fit into the water trough.  He also pawed the water with his hoof.

Suddenly, Shooter stopped and pulled something wet and furry out of the water with his mouth.  Unbelievably, it was a marmot, a fellow resident of the zoo!

The zookeepers were stunned and could not believe their eyes.  Unsure of what Scooter was going to do with the little marmot next, they watched as the huge elk placed the helpless marmot on the ground then nudged it with his nose while the little creature recovered from nearly drowning.

The staff is clearly amazed by what they saw and very happy to have the pictures of the rescue.  They credit Shooter for saving the marmot’s life.

Scooter is now a hero even if the little marmot didn’t say thank you before scampering off to his home in the zoo.

Please share this unusual rescue story with your family and friends.