This special girl wanted a dog so badly that when her parents told her she would have to graduate from college before she could get one, she began volunteering at the shelter so she could be close to them.

Oklahoma State University sophomore Hallee Fuqua loved dogs and was always begging her parents to get her one for Christmas.  Despite her pleas, her parents put their foot down, making it clear that she would not get a dog until after she graduated from college.

Wanting to spend time with and help dogs, she began volunteering at the Humane Society of Stillwater.  While volunteering there, she developed a close bond with a dog named Rambo.

Rambo was a Plott Hound mix that had been rescued from a life on the streets. He instantly fell in love with Hallee and began eagerly anticipating her visits to the shelter.  Hallee longed to adopt Rambo but knew she would have to wait until after she graduated from college.

Hallee’s parents became aware of the special bond that Rambo had with her and began making plans to adopt the dog as a Christmas surprise.  They contacted the shelter and they were happy to help. 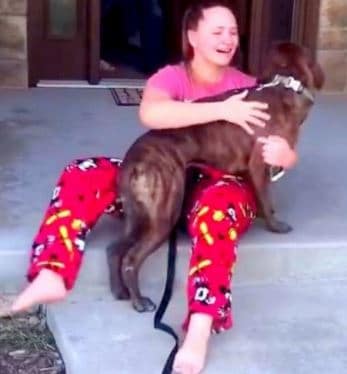 The shelter told Hallee that Rambo had been adopted and we can only imagine her happiness that he found a home, but also her deep sadness over never seeing the dog she longed to call hers again.

Her parents could not wait until Christmas and brought Rambo home and put some antlers on his head.  Her dad rang the doorbell and Hallee in her pajamas answered it.  Both dog and girl were stunned to see each other but it only lasted a moment. 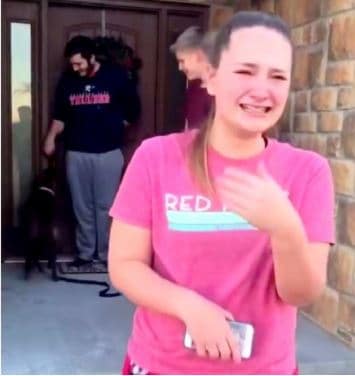 After the initial shock, Rambo rushed into Hallee’s arms and she collapses in happy tears of joy!  The best Christmas surprise ever and Rambo and Hallee are overjoyed with happiness!

Please share this sweet rescue and reunion story with your family and friends.