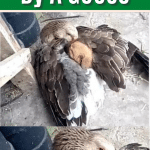 Just like humans, animals can feel empathy and engage in acts of kindness towards others. We see that every day with our pet dogs and cats. But usually people don't think geese are one of those animals. Geese have built up a fearsome reputation because of how scary they can be if you get on their bad side. That doesn't mean geese are all bad. And one goose in particular did one of these sweetest and kindest things ever.

Images showing a goose who was nestling a very young puppy on the street went viral all over social media. The goose is seen allowing the puppy to cuddle with it, letting the puppy sleep between its wings, keeping the pup away from the cold.

Many believe that the puppy was born on the streets but was probably abandoned by its mother. Sadly, the weather was very cold and the abandoned puppy was shivering. However, this lovely goose swooped in to save the little pup and kept it safe from the cold.

The goose is nestling the freezing puppy in its wings, keeping the baby as warm as possible.

The goose tried its best to keep the puppy warm under its wings for a long while. Eventually, the puppy fell asleep all cuddled up in the goose's feathers. The person who captured and posted these images on social media said that goose had even petted the puppy with its beak.

Luckily for the puppy, the person who photographed this amazing act of animal kindness rescued the pup who is doing quite well and is healthy now.

It's truly amazing to hear just how much animals can care for other animals, even ones known to have a bit of a scary reputation as geese.