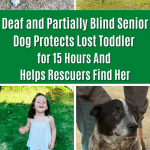 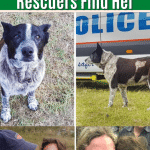 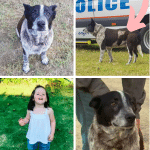 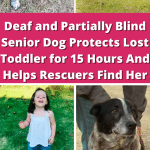 Dogs are devoted to their owners and will go to any length to protect them. Max, the 17-year-old Blue Heeler mix from Australia is not any different. When his 3-year-old human toddler Aurora walked into the bushland in Queensland, Australia, and disappeared, this deaf and partially blind senior dog did his very best to help the little girl.

This is Max. He is 17 years old, deaf and partially blind.

When 3-year-old Aurora walked off into the bushland and couldn't be found, a search party was quickly organised.

Over one hundred people joined in the search for the little girl.

There have been many instances of people going missing in the Australian bushland, so her family was very alarmed. Everyone panicked and organised a massive search party to find her. The search party included more than one hundred people, with police as well as her own family and members of their community.

But it turns out, all they needed was a dog devoted to his family.

Max had followed Aurora into the bushland, never abandoning her. When the search party was actively looking for Aurora, Max was busy keeping the little girl safe in the wild.

The search for Aurora passed the 15-hour mark and people were losing hope.

The search for Aurora went on for hours. After 15 hours, everyone was losing hope. She had been wearing very thin clothes and it was already raining. Things were not looking good for Aurora.

But then, Aurora's grandmother, Leisa Bennet thought she heard Aurora calling to her so she followed the sound up the mountain.

That's when she saw Max, who led her straight to Aurora.

Max had protected Aurora while waiting for everyone to find her.

Although he was deaf and partly blind, he managed to lead some members of the search party to where Aurora was lying exhausted and cold.

During the 15 hours that Aurora was lost, Max had stayed by her side and kept her safe.

He had curled himself around Aurora and kept her warm.

When he heard the search party down the hill, he led them right back to Aurora.

Fortunately, Aurora had no injuries and was safe and sound, thanks to the very brave Max.

People on the Internet also showered Max with compliments. Some of them wanted him to get awards for his bravery.

Max was a very brave and loyal doggo who went above and beyond for his helpless little owner. He kept her alive and got her help when she couldn't do that for herself. What an amazing pupper!