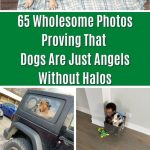 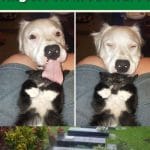 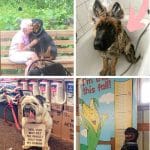 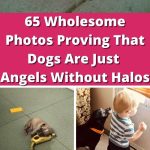 Dogs are human's best friend and they have rightly earned and defended that title for centuries. Unlike humans, dogs are pure in everything. They are loyal to a fault and affectionate creatures who love without boundaries. Basically, dogs are angels with four legs, ever-wagging tails and fur. Here are 65 angelic dogs who are missing their halos.

1. An almost literal angel with a rainbow halo!

2. This sweet pupper making friends with a baby squirrel.

4. This tiny pupper working hard to lose the extra weight.

5. Growing up together is magical when you get to grow up with a doggo sibling.

6. Their hoomans built them a little balcony so they can look over their land.

7. This hooman is entertaining the doggos with some music.

8. Someone had a great day at the spa.

9. The stairway to heaven!

10. This doggo is ready to receive the head scritches with a kiss of his own.

11. The puppy let the little boy hide in the same spot for their game of hide and seek.

12. Topping off 9 years of best friendship, this pupper is his hooman's best man at his wedding.

13. The best kissing booth in the world.

14. This little girl hates snow so her hooman sets down some plywood so she has a nice grassy spot during winter.

18. Quasimodo has a short spine but doesn't let that slow him down.

19. Sprinting through a lavender field like the angel this baby is.

20. She's getting old so her baby hooman gave her his stuffed toy sloth to comfort her.

21. This brave baby saved his hooman who was critically injured and he hurt his paw in the process. Man's best friend indeed.

22. This adorable velvet hippo and the little duckie friend.

24. This boy has a great surprise coming!

25. When the dog you didn't want makes you fall in love with her and now she's the centre of your universe:

26. The dog is growing old and swimming is hard now so his hooman helps him swim.

28. He doesn't like getting his ears wet so he wears a shower cap on them.

29. The cutest person in the grocery store.

30. After his hooman died, Capitán slept on his hooman's grave every night from 6pm every single day for 6 years.

32. This cleft palate baby who got surgery to fix it.

33. So proud of her teeny little babies.

34. Putting on her jacket so the doggo wouldn't be cold while waiting for the hooman to come back.

35. When you grow but your boot doesn't grow with you 🙁

36. This rescued tortoise has been part of this little Great Dane family now.

37. Before and after being rescued. That big smile says everything!

38. She worked hard to lose the extra weight. So cute either way.

39. When your guard dog is the world's friendliest dog.

40. This dog was lost and the scene where they are reunited will make anyone cry.

43. These dogs are patiently waiting for their hooman who is in the hospital. What a devoted family.

44. This doggo is blind and deaf but always takes time out to comfort the new foster kitty.

45. Floyd has Cerebral Hypoplasia but he fits in his hooman's backpack so he gets to go on hikes now.

46. This man just adopted this doggo. They even look a little alike!

47. This couple adopted a greyhound but she was really nervous for a long time. But one day she cuddled with her hoomans.

48. The neighbours love this pupper so much they carved this giant hedge of the doggo.

49. Every night, he asks for permission to climb up on the bed like this.

50. This brave and kind pupper keeping these helpless kittens who needed help.

51. Loyal doggo doesn't leave his best friend on his own when he's in time-out.

52. When you're a gentle giant and pick up a new friend while out in the woods.

53. If there's a dog around, obviously everyone has to stop to pet the doggo.

54. All tucked in comfortably with Batman for protection. The 4-year-old hooman did a great job tucking the pupperino in.

55. Whenever Jasper sees his sick neighbour, he brings his toys to cheer them up. Everyone needs to be like Jasper.

57. While stuck in traffic, the pitbull pulled out his stuffed toy to show it to the poodle. How adorable is this!

58. Supporting the friend during the difficult times too. What a beautiful friendship!

59. And this is how best friends are made.

60. Awww look at this adorable couple hanging out together. I can feel the love through the screen.

62. This smart and brave pupper who saved an entire family from a terrible tragedy.

63. This unusual friendship between a pupper and a pelican.

64. This awesome doggo who taught cancer a lesson!

65. This doggo is letting her neighbour pet her because the neighbour doesn't have a dog. What a kind pupper!