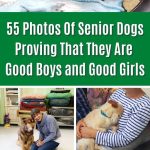 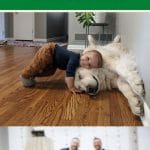 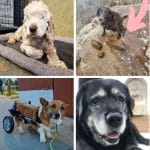 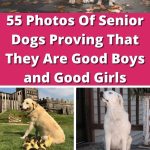 Young or old, dogs are amazing. They are called man's best friend for a reason. But when it comes to adoption, most people prefer puppies. A lot of people think that you can't bond with older dogs but that's not true. They are filled with love and it is very rewarding to have a senior dog in your life. Yes, the unexpected vet bills and other medical costs can be a little difficult to deal with but having a senior dog is not without its benefits. They  don't destroy everything you love like energetic puppies do and senior dogs make excellent companions.

Here are 55 senior doggos having a fun retirement despite old age and medical issues, proving to everyone that being old has got its perks too. Senior dogs are good boys and girls too!

2. This majestic queen with the backdrop of pink flowers.

3. Reading can be tiring at this age.

4. This little old lady knows something you don't know.

6. This majestic husky surveying his kingdom.

7. Her inner puppy is coming out in this goofy sleeping pose.

8. Aww what a happy little smile!

9. Becoming one with the couch.

11. With these wheels, she's gonna be unstoppable!

12. She loves her chin scritches!

13. The prettiest princess in all the kingdoms.

14. Getting his puppacino of the day.

17. Just hanging out, with the wind in his ears.

18. Snow turns this senior doggo into a puppy again.

20. This elderly pupper just hanging out with some teeny ducklings.

21. Is this a doggo cosplaying as a bunny?

22. This senior doggo is teaching the tiny pupperino how to be a dog.

23. Senior doggos are very adventurous too.

25. All doggos are young at heart.

27. The cutest snooter in the world!

28. This blind doggo loves to sit in the hallway and smell all the smells and hear all the sounds.

30. The cutest little overbite there ever was!

33. These two oldies matching their outfits is so cute!

34. He's blind and doesn't smell so great but he's still the best boy.

35. A nice afternoon by the pool, watching over the kiddies swimming.

37. This doggo looks like he has a lot of wisdom to impart.

39. Because her eyes are sensitive to sunlight, this pupper wears doggles.

40. This doggo is helping kittens get used to dogs.

42. This doggo is doesn't look ready to get behind the wheel.

43. A proud tradition of many many years.

45. At age 20, this pupper is the world's oldest golden retriever!

46. She just turned 16 and her birthday gift is a nice walk to the pier for a lovely evening.

48. She's deaf but that doesn't stop her from living her best little life.

49. She loves sleeping on her hooman's lap so the hooman made her this for when she's at work.

51. A panda enjoying the joy of sprinklers.

55. Her favourite thing to do is bring rocks out of the lake. What a good girl!