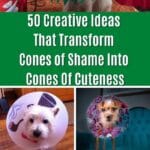 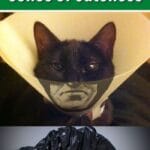 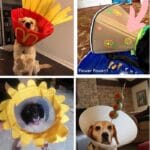 The Elizabethan cone, or the cone of shame, is a device that almost every pet has to suffer through and absolutely hate because of how it restricts their movements. As unpleasant as it is, it's often a necessity. Here are 50 times people made the cones of shame a little fun, by adding some decorations or drawings, transforming them into cones of cuteness and fun. Scroll down to see these creative attempts at making an unpleasant things a little less awful.

1. Flowers and butterflies for this adorable pooch.

2. This pooch is camouflaged as garbage. The cutest garbage there ever was.

3. Hey, this doggo is a satellite dish!

4. This beautiful pupper has a cone with beautiful butterflies and flowers.

5. This happy pooch has a flamboyant look!

6. What an amazing bejewelled look!

8.  Someone is all flustered about swirly streamers!

11. This pooch is rocking a wonderful headdress!

13. This doggo looks so happy in this very fancy cone!

15. Scuba-diving pupper is all ready for his dive.

18. A totally glitzy cone for this adorably tiny pupper.

19. Hearts for this pooch because she's the cutest little baby ever. How can anyone resist that little face?

21. The flower cone really cheered this adorable puggo up!

22. This doggo is definitely feeling the shame 🙁

24. Stay clear of the exhaust vent on this Death Star...

25. This pupper who has replaced the iconic lamp.

27. It's not a gramophone anymore, it's a dogphone!

28. The coolest and grooviest pup on the block.

30. The prettiest and happiest sunflower around!

34. A brilliant flower, if a teeny bit miserable.

36. A sad martini waiting at the bar.

37. A comfy and pretty donut cone that can double as a pillow when this pupper needs to have a snooze.

38. One of the most stylish DIY cones I have ever seen!

40. Some happy and fun little scribbles to cheer up this little pupperino.

41. Another Pixar pupper. The lampshade look of the cone is really perfect for this.

44. Sadness in a comfy flower cone.

45. This moustache is creative but seems to have pissed off the little gentleman inside the cone.

48. Despite the small smile on the cone, I'm betting that this invisible pupper is not happy.