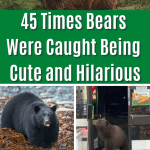 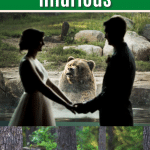 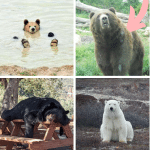 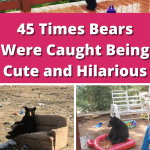 Bears are one of nature's most majestic animals. They're extremely clever and are designed to be unstoppable killing machines, but they also look so cuddly. The inspiration for everyone's favourite stuffed toy, the teddy bear, bears are adorable, derpy and quirky creatures.

Scroll ahead to see 45 instances where bears prove just how derpy and funny they are.

1. This black bear walked into a town hall. Obviously coming in for an important meeting. Guess everyone else will just have to bear with it.

3. This bear is part of a programme that tests whether commercial products are bear resistant or not, keeping both bears and humans safe.

7. No, that's not a wolf. That's a polar bear curious about a drone.

10. You might as well call me a hearse because this bear looks so cute and cuddly I'm going to hug him.

14. Ready to go fishing but this canoe isn't working.

16. Hey, it's a Share Bear with his friend the Chipmunk!

19. Just enjoying the glorious view from the top.

20. "Do you have a few minutes to talk about Our Lord and Saviour Jesus Christ?"

21. Don't judge him, he just got locked out of his house and is trying to get in through the window.

24. Taking a break to look at the pretty flowers.

27. "Mooooom! Stop! Not in front of my friends! Ugh, you're sooo embarrassing!"

28. Chillaxing in the pond and contemplating the futility of life.

29. This bear is assembled incorrectly. Who threw away the IKEA instructions before putting the bear together?

35. This bear is an absolute unit!

36. He's not happy to bear witness to this union.

40. It's the mythical tree that sprouts bears!

41. "When I'm only bear-ly holding onto my sanity, I like to sit by the lake and watch mountains in the distance"

41. Bear Grills at the Bearbecue. Do you want your steak medium bear or beary well-done?

44. Arrested for the crime of being illegally smol and illegally cute.

We hope these delightful bears made you chuckle or laugh out loud with their unbelievable cuteness and goofiness. Bears are a global treasure and need to be protected at all costs.