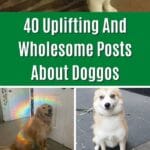 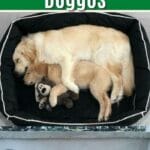 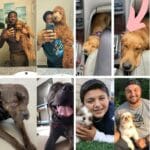 If you had to name one of the best things on this planet, I'm sure dogs would feature pretty high on that list. And why not? They are amazing animals who are so loving and loyal. There's really no better friend and companion than a dog. So we're celebrating pure doggo wholesomeness with these 40 uplifting posts about doggos!

1. When mum asks you to smile for the camera:

2. This snoozy pupper snoozing the day away.

3. The best pilot in the whole world.

4. Kylo is rocking his new sweater. Doesn't he look so handsome and comfy?

6. When your friend comes visiting and you just can't stop smiling:

7. An unusual but adorable sleeping position.

8. These puppies are leading by example.

11. In 2 weeks, his sad face changed into this handsome smile!

12. Rescue and adoption really does save lives.

14. The smoosh face has stayed the same over the years.

16. Pure happiness after being reunited after 200 days.

17. A story of a girl and her not-so-secret-admirer.

18. The end face tells you, "you couldn't resist my cuteness, could you".

19. Clearly this is Grade A security.

23. Hooman got a special mask for doggo because of the air pollution.

27. When you think you're still smol enough to use your smol sister as a pillow:

28. Testing out beds at the store. Looks like this is the one.

29. Therapy dog being a comfort to a sick child.

31. This pupperino is the best at greeting new people!

32. I'm supposed to present treats to Her Holiness, correct? And then she will continue to bless us with her light?

33. A doggo with her favourite person in the world: grandma!

34. 17 years later, this doggo and her toy are still together.

35. Spencer is so relaxed to be in his new home.

36. He was so good at the vet, he got a little red star right on his sweet little head.

37. A doggo and his own kayak, floating around in the ocean.

38. This is the first time they were allowed on grandpa's bed and one of the floofs is almost imploding with happiness.

39. Someone turned 15! And celebrated with a pretty pink dress and a yummy cake.

40. So excited to be with their grandparents!