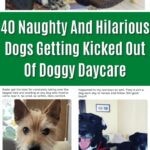 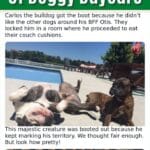 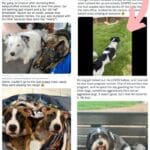 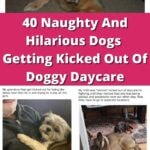 If you have dogs, you'll know that they are capable of being so adorable but also ridiculously mischievous. Sometimes, they are so naughty they even get kicked out of doggy daycare. It may be sad that the puppers got kicked out but the reasons they were asked to never come back are absolutely hilarious! So here are 40 doggos who were expelled from doggy daycare for being too naughty or too quirky. Enjoy!

It all started when this woman told people on Twitter that her father's two dogs were kicked out of doggy daycare because they formed a "dog gang".

People loved it so much that they started sharing about how their dogs and puppies got kicked out doggy daycare too and the results are hilarious!

1. Showing his criminal colours from a very young age.

4. The King of the Mountaintop hogging the slide and his dedicated bodyguard doing her job guarding the slide.

5. She was protecting herself from a dog who was violating her boundaries and personal space. But also what a badass.

7. Aww he was just trying to protect the pregnant lady and her baby from the little scoundrel doggos! He is the hero we need.

8. She drives the boys out of their mind. Can't blame her for that.

9. When your extreme love for your hooman gets you booted out of daycare 🙁

10. He may be snarly but he's got discerning taste.

13. Protesting being separated from his favourite doggo by eating couch cushions.

15. The burdens of being too pretty.

16. When you fall in love with the hooman in charge of the doggy daycare:

17. Well, there is very little difference between a fluffy dog and a sheep.

18. Obviously, they were getting on her nerves and needed to be disciplined.

24. Who needs doggy daycare when you have a super cute sibling?

25. One would say she still hasn’t gotten the hang of “sharing is caring” but really she made sure the other dog shared quite well.

26. This is just so mean and uncalled for.

27. All this sophisticated lady is missing a string of pearls around her neck.

28. No jail is big enough or tough enough.

29. When you're craving a snack but don't want to share:

31. This dog yelped all the way to the ban list.

32. When you love your sibling a little too much and get jealous easily:

35. The look on his face is clearly saying "seats taken".

36. Did they open their barrel of whiskey too soon?

37. Look at that face, it's the face of innocence!

38. She sure has them trained!

39. If the dictionary entry for "double trouble" had a photo:

40. They were playing too ruff!

While these were funny, it was sad to see that some doggos and puppers got kicked out of daycare. Someone even said they want to open a daycare just for all these expelled good bois and gorls. What a wonderful idea!